Sisters of St. JosephUniting All in God's Love

Action at the Border 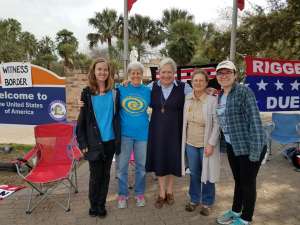 Sisters Janet Kinney and Susan Wilcox witnessed at the border in Brownsville TX in January. They went to witness and learn more what is happening here at the border to families and individuals who are not being allowed entry into our country.

They had the opportunity to cross the border at Matamoros and walk through the tent city. Approximately 2500 people are living here – coming from Central America and Mexico. Most pictures here will not be of direct faces. 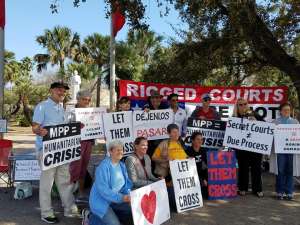 They met wonderful, committed people who are trying their best to bring attention to the plight of these individuals and families looking for a better life – most are seeking asylum. 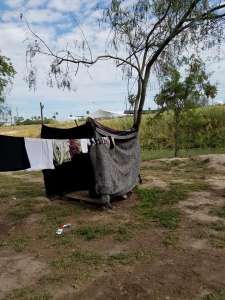 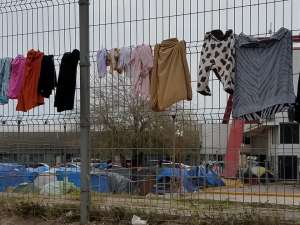 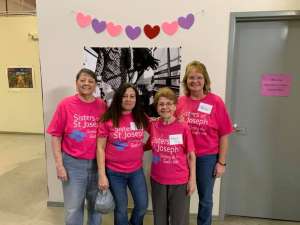 Annunciation House is a volunteer organization that offers hospitality to migrants, immigrants, and refugees in the border region of El Paso, Texas. Since its founding in 1978, it has provided shelter, clothing, food, and other basic necessities for hundreds of thousands of migrants, mostly from Mexico and Central America. It also participates in advocacy and education around immigration issues and seeks to be a voice for justice and compassion, especially on behalf of the most marginalized of our society. Rooted in Catholic social justice teaching, the volunteers of Annunciation House live simply and in community, in the same houses as the guests we serve. Click here to learn more about Annunciation House.

ACTIONS WE CAN TAKE:

This shelter for migrants is sponsored by the diocese and staffed by our sisters, lay partners, and volunteers. You can donate directly through: ttps://cssjfed.breezechms.com/form/9018cd

or send checks to:

Please put “Mexico” in the note of any checks. Our sisters in Maine will see to it that these funds get to their sisters in Mexico.

Use opportunities to become better acquainted with persons of different races by reading books by authors of other races, participating in discussion groups, and sharing in cultural celebrations, events, and interfaith activities.

Write letters to the editor when you perceive racial bias in reporting.

For people who are white, reflect on the attitudes and behaviors that influence your relationship with people of color.

Examine policies, procedures, and practices at your workplace, organizations, and institutions and encourage them to value diversity.

Speak up when you witness discrimination against others.

Do not engage in or tolerate racial slurs and jokes.

Vote for candidates who make ending racism and all discrimination a priority.

God of love and mercy, touch our hearts and call on us to acknowledge and respect the “dear neighbor” in our midst. We pray for openness in our hearts to reject racism and all discrimination against our sisters and brothers. Inspire us to be agents of unity who embrace those who cross our paths with love and acceptance

Activism is My Rent for Living on the Planet.

You can stop President Trump’s latest attack on immigrants, families, and communities.   It’s the proposal to redefine the term “public charge.   The term “public charge” isn’t new.  Since the 19th century, immigration officials have rejected would-be immigrants if they decide the person likely to become dependent on the government for financial and material support.  President Trump’s change to immigration policy would essentially punish immigrants with legal status and their families for using certain public benefits, like Medicaid or food stamps. Public programs and services that promote public health and community well-being should be accessible to everyone.

President Trump wants to radically expand the list of programs  when determining if an immigrant is likely to become a “public charge.”  In addition to considering use of cash assistance programs and long-term institutional care, the government could now deem a person likely to become a “public charge” if they use a broad range of social services. These include programs that provide food, health care, education, and shelter – basic human rights that all members of our communities should have.  The proposed change may also consider whether to include the Children’s Health Insurance Program (CHIP) as a determining benefit for a public charge.  Trump’s proposed change also requires immigrant families to meet a certain income threshold requiring a family of four to earn nearly $63,000 annually. Such income requirements would create an immigration system rigged for the wealthy, putting green cards up for sale to the highest bidder.

Fairness and compassion should never be dependent on a person’s race, ethnicity, or place of birth.  Implementation of the proposed rule will force immigrant families to choose between their health and well-being and lawful immigration status: an impossible choice that harms everybody.   If immigrants access benefits, they may leave their family vulnerable to separation. Or they may forgo needed assistance.   The proposed rule has another effect: making people more fearful. Because the Trump administration has signaled that it intends to penalize immigrant communities for seeking help when the need it, immigrants may be more afraid to use benefits — even ones that don’t jeopardize their immigration status.

How can you help?

The ruling has not been finalized, and the proposal is now open to the public for comments.  Under federal law, the government is required to read and respond to every unique comment before issuing a final rule.  A flood of comments can slow down the process, shape the administration’s decisions, and show how many people care.  This is your chance to tell the Trump administration that you reject this rule because of its harmful impacts on our communities, especially immigrant women, families and immigrants of color. There is still time to push back. Comments must be submitted by Dec. 10.  Submit your comment now,  Tell the government to reject any regulation that would punish immigrants for accessing needed services. Use your own words and write from your own values and those that resonate with you from the text above. Here are some things to keep in mind:

A good comparison for the investment many congregational members made in Rural and Migrant Ministry recently is from the parable about the mustard seed.  The smallest of all seeds becomes a tree that has great value to many of God’s creatures whom the tree provides for.   Recently, many small  donations from Sisters and Associates were able to start a  summer camp experience for the children of farmworkers in Riverhead, the site of the new worker center.  And on August 1 and 2,   2 teams of  sisters and associates (including congregational leadership) will be part of the camp meal program – providing a picnic one night and a chicken dinner another for these young people.    If you can participate in another call to action from Rural and Migrant Ministry you will be responding to the emergency noted in the e-mail I am forwarding.  Everything you need to know is included.  If you choose to “accept this mission” (challenging but not impossible) click on the link that says invest in them or Yeg’s New Van.  Thanks for your help in resources and in prayer.

When the screen for the donation comes up, it starts with $25, but you can modify that when you click on it.  The next screen can be edited.  Just delete the $25 and type in anything of your choice from $10 to $24. .  Then continue to add the donor identification they ask for including your credit card number.  The fee for processing your donation will be $1.09 (for a $10 donation so that the $10  goes to RMM eho don’t pay a fee for the service

We are asking you to donate $10, and we ask you to find 9 other people who can donate just $10 for the members of the Youth Economic Group.

If we can get three thousand people each giving $10 –

YEG gets a new van!