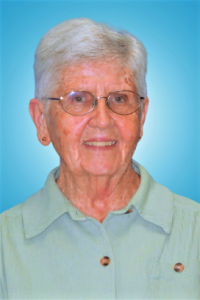 We celebrate the life of Joan Dolan, S. Joan Gabriel, a Sister of St. Joseph for 71 years

Joan was born in Brooklyn to Catherine and William Dolan.   She had a sister Catherine- Rene and 3 brothers, Jackie, Bill, and Harry who were all part of a loving and attentive family that was an important part of Joan’s life.

Joan’s life was about relationships.

She had a deep relationship to a loving God that she nourished and cherished through prayer and contemplation.

She had a loving relationship with her family. She loved her family get togethers and outingsAnyone who knew Joan, knew of her love for each one of you.

Joan‘s relationship with the Sisters of St. Joseph began in her home parish of St. Anthony’s in Brooklyn.  She entered the congregation after attending the Juniorate. She started her teaching career in St. Michael and St. Mel elementary schools and from there went to Bishop Kearney to teach Religion.

In 1969, she was appointed principal and superior of Queen of All Saints in Brooklyn.  She was rather young at that time to be a superior. In that convent there was a group of young sisters who were right out of the novitiate- trying to find our way- rather clumsily.  There was also a group of- shall I say- seasoned sisters- who wanted very much to show us the way.  Joan- ever the diplomat- was able to show the respect due the seasoned sisters and at the same time encourage and support those of us finding our way- no easy task, but she maintained good relationships with all.

Joan went on to earn a master’s degree in counseling and returned to Bishop Kearney in the counseling department and then to The Mary Louis Academy where she remained for 29 years until her retirement in 2018.  She served as a Guidance Counselor, Guidance Chairperson, and then as volunteer.  She helped hundreds of young women find the right road in life.  She had an open door, a compassionate manner and a ready smile.

When Joan became a volunteer at Mary Louis, she stood at the ready to be of assistance in whatever way she could. Her question was always- “how can I help?” No greater love than this than to take one’s locker room turn.

In her last home, Sacred Heart Convent, she maintained her life-long stance of forging relationships.  They describe her as “a quick-witted delight who was always joyous and never without a smile.” Once again relating to people through her warmth.

Upon hearing of Joan’s death, The Mary Louis Academy eulogized Joan in this way:

“She will be remembered for her outstanding sense of humor and genuine care for all those she encountered. Her endearing chuckle and spirit of kindness will always live on in the halls of the school she served so well and the lives she touched so deeply. We are truly blessed to have known and loved such a special woman. “

What more can we say than- well done- good and faithful servant.