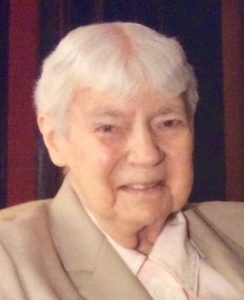 Born April 14, 1915 in Our Lady of Angels Parish, Bay Ridge, she was the first child of Francis and Alice Young. Over the next ten years, her four siblings Fran, Bud (Francis Jr.), Ruth and George joined the family which included: Grandma; Uncles George and Ed, Mother, Dad and Mary Alice.

Despite her Mothers efforts to train Alice as a demure young lady, Alice was a fun loving, Tom boy.  Being a great story teller, she would laugh as she spoke of refusing her Birthday gift of a Bike because she wanted a boy’s bike; or taking forbidden excursions to Coney Island.

In September 1932, Alice surprised everyone who knew her by entering the Sisters of St Joseph of Brentwood. After completing 2 years of Novitiate and college she was assigned to Our Lady of Sorrows, Corona to teach 1st grade. One year later, in1936, she was assigned to St Joseph’s College Convent. She remained living there until her death.

During those many years, she earned a BA in Education and Psychology at St Joseph’s College; her MA in Early Childhood Education at Teachers College, Columbia U.; spent 3 Summers at Catholic U studying

advanced courses in Psychology. Between 1949- 1952 she completed PhD Courses in Child Welfare and Development at University of Minnesota. She completed course work for Ed.D in Early Childhood Education at Teachers College, Columbia 1966-1971This was all accomplished while she was teaching in the Pre-school, Dillon Center and Instructor in the Child Study Department, SJC.As if this was not enough, in the 1950’s, she became a TV star when she and her dear friend and colleague S. Margaret Louise Shea were invited to appear in a series of programs on the religious education and moral development of young children.

In the 1960’s, she helped develop the curriculum for “Head Start “for the Catholic School System.  She then implemented the program at 19 centers in inner city Brooklyn. These centers were the first and most successful Head Start Programs in NYC. This achievement was acknowledged on the occasion of her 80th jubilee by a citation from Senator Schumer and noted in the Congressional record.

As guest lecturer at home school associations throughout the city she widened the circle of influence she had on the educational and moral development of children. She helped in the professional development of teachers throughout the  Board of Education through her lectures at educational conferences. As consultant to Brooklyn Educational and Cultural Alliance (BECA).she was able to include the arts and music into the early childhood curriculum.

In 1971, Sister Alice was among the first Professors at SJC Brooklyn to take weekly trips to the Patchogue Campus. She made significant contributions to the development of the Child Study Department at the eastern campus. In 1985 she retired as an Associate Professor but worked as an Assistant to the Child Study Department keeping records and doing observational field visits for Junior’s completing teaching placements.

With all this, Alice still had time, energy and heart for her family and her Community. She participated in many Chapters and was often known to raise her hand, questioning or commenting on the issue being discussed. She cared deeply for her family preparing “care packages “for her many college bound great nieces and nephews. After the death of Fran’s husband, Jim Mc Carthy, she made frequent visits to Larchmont to assist in the care of her sister who had Alzheimer Disease. She loved Family gatherings and visited Maplewood, NJ; Virginia, Pittsburg and Florida for weddings, christening or graduations.

In 2000, she retired from the college, and began a new phase of her life’s journey known as retirement. At St Joseph’s College Convent she continued to be a Master Teacher showing us how to become more simple, more prayerful, more courageous, and more compassionate Sisters of St Joseph. In her cheerful manner, her open greeting, her listening ear she assumed the role of Sister Portress, sharing her joy, her smile and her gift for story telling that allowed her to delight all of us with her escapades and life experiences.

As Alice’s eyes grew dimmer and her heart began to race she adjusted her daily routine to a more sedentary mode spending more hours at prayer and was frequently seen fingering her beads.  When she fractured her hip and required more assistance, she accepted her limitations and celebrated each gain in strength and mobility. She showed real joy and happiness with our achievements and supported each of us in our ministries Each year she would send for S. Elizabeth, the President of SJC, and broach the subject of moving to Brentwood but was delighted and comforted that we wished she would stay and so she did.

She knew the communion of saints well and was at home with visits with Fran and Grace Virginia, both of whom pre-deceased her. Alice continued to enjoy everything in life. Visits from the “Babes” at Dillon; the excitement of the triple crown; weekly visits from Roger; colorful flowers, and the phone. Her vocabulary seemed to have two major wordings: Thank you and I love you .She  found waiting hard but she prayed for a “Good Death” and on July 6 with the assembled community praying at her bedside

Alice, a Master Teacher is a simple, prayerful, courageous and  compassionate Sister of St Joseph –May we all learn from her example.

Sister Alice Francis Young, CSJ died on July 6, 2016 in the 83rd year of her religious life.