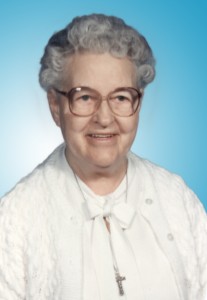 Regina Miller entered the Sisters of St. Joseph on February 2. 1940 and at Reception she received the name Sister Ann Regis.

To prepare for her various ministries in education, Ann earned a BA in English/Latin from Manhattan College, an MA in Latin from St. John’s University and Certification in Spanish from Queens College.

Ann’s first ministry was as an elementary school teacher in the primary grades. She then taught Latin at The Mary Louis Academy and at St. Angela Hall Academy. Ann also served as Superior and Principal of Queen of Peace School in Kew Gardens, Queens. Using her language skills, she did volunteer work with Sister Anita de Lourdes in Tamarinda, Ponce, Puerto Rico.

She was appreciated by faculty and students alike as a fine teacher. She was the type of teacher who took responsibility for the success of her students and did everything she could to help them learn. When she came to live in the Motherhouse in 1991 – after having given 50 years in the classroom, Anne volunteered to tutor in the Academy which she did until it closed. She would hand deliver little reminder notes to the girls in homeroom telling of their appointments with her and if they failed to show up she would head to the cafeteria to fetch them herself. They found her prepared, supportive and non- threatening. She was very well liked by the girls.

Another clue to her dedication was that she was willing to tutor in subjects that were not her own. Math always finds much need for tutoring and Anne cornered other Sisters like Sister Catherine Anita to tutor her on Sunday morning so she could tutor the students  on Monday. When the Academy closed she often helped the young Spanish speaking workers in the Convent  Kitchen prepare for their GED. She actually mastered a graphics calculator so she could help one of the young fellows struggling in BOCES. Clearly her mission was teaching and she was good at it.

We will remember her as a kind, soft spoken, hard working woman who devoted herself to her ministries and to the people she served.
Anne was a committed woman religious. She was consistently prayerful, thoughtful, kind and even self- effacing. Her one failing may have been that she didn’t expect anything for herself and so we pray today that she now knows the utter fullness of life that awaits all God’s beloved.

Sister Ann Regis Miller,CSJ died on August 26, 2014 in the 75th year of her religious life.