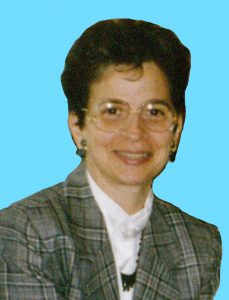 Today we celebrate the life of Sister Consuela DeBiase.

What is the measure of a life well lived?  One could start with the simple facts of her childhood– born in Brooklyn on September 7,1937, eldest daughter of Caesare and Lucille DeBiase, nurtured in a traditional Italian family, one of two girls, her father a family physician.   Connie’s early life was shaped by the experience of growing up during World War II, which caused the family to move and live with her grandmother until her dad returned home, when life in her words ‘became normal’ again.  Then moving to a house in Ridgewood, attending St. Brigid elementary school, followed by St. Angela Hall Academy where her relationship with the Sisters of St. Joseph really began.

Upon entrance into the community, Connie attended Brentwood College and like the majority of the sisters in the congregation began her ministry in education, first on the elementary level, later in high school, teaching French and Italian at Fontbonne Hall Academy and the Academy of St. Joseph.

And then, life took a turn that I don’t think Connie ever would have imagined for herself.   It was the years just after Vatican II, when Congregations were being called to go back to their roots, and immerse themselves in the spirit of their Founders – for us that would be in LePuy, France.

At age 32, Connie was chosen by Mother Immaculata Maria to be part of a group of 10 sisters from across the country who would be the Research Team working with Father Nepper, a French Jesuit. Because of her fluency in French, Connie and these sisters were called to do an in depth study of our primitive documents – the Constitutions, the Eucharistic Letter and Maxims, to name the most significant ones.  Connie was part of not one, but two research teams, which spanned almost 20 years, and took her back and forth across the Atlantic, and throughout the US, where she spoke at Federation events, gave lectures and became a part of the formation of countless young women whom she taught about our charism and founding documents. Connie found a special joy in these experiences, both in the reflecting upon and sharing of her research as well as making them living documents for the current time in history.

It was also during this time that some might say she found her true calling. Connie went for advanced studies in spirituality and spiritual direction at Creighton University, gave retreats in the charism and began providing spiritual direction at Bethel House of Prayer, later leaving there to be on the retreat staff at Mercy Center in Madison, Connecticut where she worked for 17 years. For the next dozen years Connie continued giving direction out of her home, in person and very often on the phone! Not to mention her continued travel to other congregations, some where she had a yearly commitment, and many other invitations to speak and direct. If ever there was a full date book, that was Connie’s!

So who was this woman, Connie? Certainly a woman with an inquisitive and quick mind. I recall her sharing once about being on the Constitutions Committee for the congregation and the committee was meeting for two days. Early in the first day Connie gave a proposal to the committee; it was put aside.  At the end of the second day, the group came back to her first proposal and accepted it.  When Connie appeared a bit flummoxed as to why only now the group accepted it, the response was given: “For some of us, it takes a lot longer. You know, we’re all not Connie DeBiase.”    And what about her infectious laugh? She surely enjoyed life and lived it with zest and flair.

Family was very important to her, and she was so proud of her niece Carla attaining her doctorate and her work in the prison; also her nephews Charles, Francis and Joseph’s accomplishments in business and engineering.  She remained close to her “Don’t Go Home group” – party mates who regularly gathered – even when Connie moved to Connecticut.   She had such a wide web of connections, across congregations, with lay folk and religious, and forged deep friendships, that transcended distance, two of whom concelebrate with us today, John and Kevin.  And I must mention one particular friendship, Marilyn from Connecticut who helped care for Connie just before she returned to Brentwood. We owe a debt of gratitude to her.

I was privileged to be a connecting link between some of these relationships in Connie’s final days.  A few nights before she died, as I sat by her bedside I was corresponding – via text – rather late – with Janet Mock.  Janet shared about a retreat experience Connie had in Baden, where she described to Janet a beautiful birch tree with branches outstretched as if they were singing Alleluia. Janet then remarked, “Connie is Alleluia.”

That image came back to me when I thought about her very last moments.  Connie’s eyes were gazing out the window looking toward something in the distance that only she could see. I imagined that birch tree, its arms outstretched, beckoning to her – ‘Come, my Connie, my lovely one, Come. It’s your Alleluia time.’

So we begin this liturgy, with great gratitude for the gift you have been to us Connie.  And may we proclaim in one voice –

Sister Consuela DeBiase,CSJ died on February 10, 2017 in the 62nd year of her religious life.