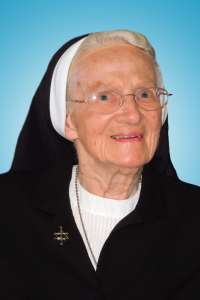 Ten years ago, when our beloved Sister was recuperating from a debilitating fall, she called me to say that she was preparing her funeral Mass, and asked if I would give the eulogy? I told her I would be honored to do so. She thanked me and then said she had one request, Keep it brief.

I take great pride in claiming her as a dear friend whom I met almost 50 years ago when we were missioned in Fontbonne Hall Academy. She impressed me because although she was a Senior Sister, she never pulled rank and was the first to help out with whatever chores needed to be done.

It was my good fortune to discover early on that S. Edward had a great desire to travel and so in 1971 we began the first of many trips abroad. We traveled to Ireland where we stayed with her family in Roscoman and then on to Italy to visit my relatives in Salerno. We also toured Lourdes, Assissi, Spain, Medjagorie and Quebec City. I mention this because in later years when she could no longer travel abroad, we would reminisce. This would include talk of the people we met, the places we visited and the interesting happenings along the way.

Edward was a wonderful companion and story-teller. I enjoyed hearing about her idyllic childhood. Stories of her father, a doctor and of her mother who oversaw the up-bringing of her siblings, Eileen, Harriet, Pat, Edward and James. She spoke of her home in Rockaway, a few blocks from the ocean, which was open-house during the summer months for relatives and friends to come and enjoy a day at the beach. A meal was always provided before the visitors returned to the city. I learned that as a child, Marie went horse back riding every Saturday and did you know that as a teen her father and brother taught her how to drive. Picture Marie driving around Bell Harbor in the latest Model T Ford.

Family gatherings were always important to S. Edward and so she traveled long distances to keep in contact. This meant flying to Mobile Alabama to see her cloistered sister Pat. She also visited her sisters Harriet and Eileen in Upstate New York and very much enjoyed interactions with her nieces and nephews. She truly loved her family. As S. Edward aged, they kept in close contact with her. The Murphy Clan was always on hand to celebrate her anniversaries and birthdays. The last 5 celebrations — The 100th to the 104th were particularly memorable.

All who met S. Edward recognized her deep spirituality. She was a proud Sister of St. Joseph, had a great devotion to our Blessed Mother and the Sacred Heart. Blessed with a deep awareness of the Holy Spirit in her life enabled her to gracefully move from her assignment as teacher, to her involvement in the Formation program, to the director of outreach in Sacred Heart Parish, where she retired from full time ministry at the age of 80.

Fourteen years ago, S. Edward took up residence in St. Joseph Convent in Brentwood where she set up a rigorous schedule for herself. The alarm clock would go off at 5 o’clock each morning. This allowed time for her to exercise, walk round the bend, say morning prayer, attend Mass, watch the prayer channel and spend time in the chapel. She also volunteered in the Learning Connection, a program which taught newly arrived immigrants English as a second language. It was only after an illness that she agreed to silence the alarm and quit exercising.

Later as S. Edward advanced to living with assistance, she continued to impart her words of wisdom to all who crossed her path – whether rich or poor, young or old, religious or lay. She listened intently to all and promised to keep each one in prayer. During this time, S. Edward continued to enjoy good food and was present each day for meals in the dining room. Her long-time dining-mates, Sisters Mary McConnell, Ave Regina, and Pat Grant made certain that her meals were correctly served and that there was timely conversation. S. Edward also enjoyed going out to dine and for many years enjoyed lunch at the local Bon Wit Restaurant where the staff got to know her and made her feel very special.

The last few weeks in Maria Regina were very difficult for S. Edward. She had excellent care with the same kind, considerate aides as she had in the Renewal Center, but she desperately wanted to go home – home to her parents and siblings. For 5 days before her death there was a round the clock vigil by Sisters Chris Adams, Frances Clare, and Rosalie Carven. Her desire was finally granted this past Tuesday at 5 pm. Sister Mary Ryan and I were with her as she peacefully slipped away. The staff and Sisters were sad,  but comforted knowing that S. Edward had finally gone home.

In conclusion, I wish to say Thank You Edward for the example of a life well lived. A life in complete harmony with the Holy Spirit. All of us gathered here to mourn your passing know that from your heavenly perch you will some day greet each of us. In the meantime, may we honor you by striving to live our lives as you did – graciously open to God’s Holy Spirit. Amen.  Alleluia.
Sister Marian DeFeis

Sister Edward Joseph Murphy, CSJ died on July 10, 2018 in the 86th year of her religious life.