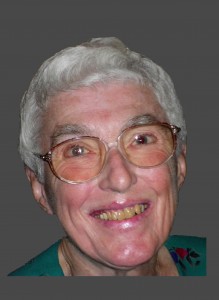 ELIZABETH PROEFRIEDT, PRESENTE!   We, the Community, who are gathered here to remember and celebrate our sister Liz, believe that she is present here with us as is her friend, Dan Berrigan, both members of the Kairos community, who spent their lives speaking truth to power and praying and working to ease the burdens of our sisters and brothers wherever they be found. As so many of you have commented, it is surely not coincidence but connection, which brought them to the cloud of witnesses within a day of each other.  Liz’s profound commitment to peace and non-violence, her devotion to Pax Christi, the CSJ non-Violence Community and to the War Resisters, as well as her bird-watching and dedication to this St. John’s choir flowed from a lifelong process of contemplative engagement with her Loving God.

From the weekly vigils at the Military Recruitment Center at Times Square, her efforts to lift the sanctions that were killing Iraqi children, demonstrations here in New York City and in Washington, D.C., initially to stop the War before it Starts and later protesting a War that was built on lies and our greed for oil, Liz put her feet to the ground and walked the talk.  Her presence in Fort Benning was a loving indictment of the US’ training of Latin American military to oppress their democratic movements, particularly among the young and student leaders and was an expression of solidarity with our Latin American sisters and brothers. Liz participated for as long as she was able in all mobilizations against nuclear weapons and our efforts to encourage the United States to participate in, and be faithful to, non-proliferation treaties and in lamentation rituals for the destruction of Hiroshima and Nagasaki.

Her intentional humility and compassion led her to engage with those who needed more information, those who opposed us as well as the police and the military who were arresting us. As she was more physically challenged and less able to engage in civil disobedience or “divine obedience” as we always named it, her progress in the contemplative life and in faith, assisted by the beauty of her Stella Maris home and the kindness of her sisters, the volunteers and the staff, led her to run towards the inexpressible delight of love with her heart overflowing and open to receiving and sharing the delightful pleasures of the love of God, a wonder that often led her to poetic expressions which nourished those of us with whom she shared her poems. Liz had befriended death some time ago and having been caught up in the Final Mystery of her loving God will continue her mission of Peacemaker, a challenge and presence to all of us.  ELIZABETH PROEFRIEDT,PRESENTE!

Sister Elizabeth Profreidt, CSJ died on April 29, 2016 in the 66th year of her religious life.