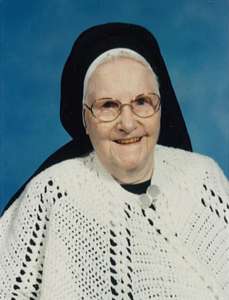 During a visit to Maria Regina Residence I passed room #137 and the resident waived me in. I entered and introduced myself, and our relationship began. Sister Francs Gerard Kress, a Sister of St. Joseph,  embraced and lived the charism of the Sisters of St. Joseph during 104 years of her life.

In one of our early conversations she said “I asked Jesus to send someone and he sent you”. What I share with you is based on our conversations.

Irene Pauline Kress was born on Thanksgiving Day to Harry and Josefina, an immigrant from Finland. She was the first of their three daughters and her grandniece Debbie is present with us today. She lived in the Coney Island section of Brooklyn and attended Holy Innocents School. Since there was no girl’s Catholic High School available her parents sent her to Business School.

From the time Francis was in elementary school she wanted to be a sister. She entered the Congregation on Feb. 2, 1933.  As a CSJ Francis lived out the charism of the Sisters of St. Joseph, to look at the needs of the neighborhood and attend to them.

Francis was part of the second group of our sisters to go to Puerto Rico. She described how the military worked with the sisters and built the infrastructure for the island during World War II.

Francis described herself as a street sister. She visited the local merchants and asked them to give shoes to the children and food to the families who needed it. When Francis realized her children were having difficulty in class because of their poor eye sight she organized a bus trip to transport the children to a clinic that provided eye exams and glasses.

She taught catechism at the Raymond Street jail. And she invited a priest to visit the inmates.

When Sister Francis was in Transfiguration she asked one of the parish members to investigate why students weren’t coming to class. This began her relationship with the Gomez and Santiago family which continues to this day and we are happy to have them here with us.

Francis was an educator. She loved teaching the fourth grade. Her classroom was an environment for the training of leaders. Francis’ gave her students responsibilities and called them  “captains” to do charges like cleaning erases and opening the windows. Sister Francis also recognized that having the students work together, the students having difficulty would learn from the brighter ones, educating both groups in the process. She recalled an incident when she was questioned why she wasn’t giving homework. From her perspective homework of the best kind was research and so that is what she assigned.

Under her direction the “captains’ were able to work to create a safe schoolyard. They provided information to local officials which led to a change in the traffic pattern near their schoolyard. When the parents realized that Sister Francis had facilitated the training of their own children to work with local officials they invited her to become the head of the local civic association.

When visitors came to see Sr. Francis and mentioned the Newtown Creek it was evident that cleaning up Newtown Creek was her passion. She worked with co-ministers to focus attention on the implementation of the Clean Air and Clean Water Quality Acts. She testified before Congress on the need to clean up the environment and worked closely with Mayor Ed Koch in creating the Department of Environmental Protection.

At Maria Regina Residence the staff called her the Immigration Sister because she encouraged them to apply for citizenship. She always kept the applications in her closet.

Who was Sister Francis Gerard Kress?

When Francis saw something to be done she would say “Just do it.”

Francis was a listener. Visitors would speak about their families and ask for her prayers. On their return visits she would ask about them by name. She never forgot them.

She embodied the call of our first sisters to divide the city to see what had to be done and did it. She saw what was needed and did it at every stage of her life.

Sister Francis Gerard was a person who lived in the Presence of the Divine. When entering her room one could be drawn into the heart of God.

She touched people because she listened; she remembered; she knew you; not by sight but by name and by sound. She touched their hearts. She could meet your heart if you let her.
Marianne Sennick, CSJ

Sister Francis Gerard Kress, CSJ died on January 17, 2019 in the 87th year of her religious life.