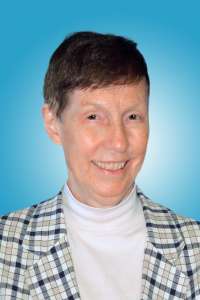 Reflection on life of Sister Joan A. Ryan

I have only known Joan for the past five years when she welcomed me, as her new neighbor to the third floor of St. Joseph’s Convent.  We were the newest kids on the block and found ourselves together, many times trying to figure out where to go and what to do.  As I needed physical therapy and Joan needed physical therapy at the same hospital, we decided to make appointments so we could travel together.  These trips were the beginning of a “getting to know you” and discovering our mutual love of movies on the big screen.  As often as we could, we went as far as Farmingdale for an afternoon movie.  As the recent years unfolded, Joan wasn’t up to leaving home, but she never missed a movie shown here, even if she slept a bit.

In addition to trips to doctors and other appointments there were longer trips to Hampton Bays and the East End where monthly we would go – while Joan visited her dear friend, Father Donald Diederick in Southold, I met with a prayer group nearby.  Father had taught Joan when she attended the Seminary in Huntington for a degree in Theology.  Because of her inquiring mind and deep love for Scripture, I have only recently learned that Joan earned 32 credits beyond what was necessary for that degree!

Living with Joan in the Convent, and following her to live in Residence 4 as renovation in the Convent started, I have had a special opportunity to know her and her beautiful qualities.  But she never, ever spoke of her studies, the honors awarded her, the conferences attended, committees and boards she served on nor the 33 foreign trips on which she led like a Pied Piper, the students and alumni of St. Joseph College from 1983 to 2013. While she loved teaching history and being research librarian, boasting and bragging were not part of her personality.  There is just one award which she did share with us and it is not found on any of her resumes.  That is the fact that she won a four year scholarship to St. Francis Xavier Academy upon graduating from elementary school.  Her mother wanted her to go to the Catholic high school which her older sister Dorothy had attended, but Joan wanted to continue her education with the Sisters of St. Joseph.  And so from Holy Name parish school to St. Francis Xavier Academy and on to St. Joseph College for two years before entering the Convent, our quietly determined young Joan began her life with us.

Today, we remember the sister of St. Joseph, known as Sister Marie de la Salle, Sister Joan Aileen Ryan, who was “kindness personified” – to her students, family, friends and community.  We knew her as a gentle, gracious, spiritual woman who so appreciated the lives and gifts of everyone she met.

I believe that Joan met God in the silence of her heart, in the place where she heard the whisperings which directed her intellectual pursuits and all that followed.  Above all, she certainly was most grateful for it all.