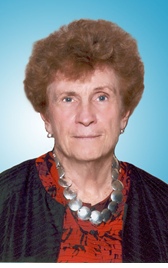 During the past few days since Judy died unexpectedly on early Sunday morning, July 30th and especially at her wake and funeral mass in Puerto Rico, many stories were shared about Judy from her family, the sisters with whom she lived, her colleagues at Academia Maria Reina, and her friends both here at on the island.  So, my reflection this morning is somewhat of a compilation of all of these dimensions of Judy’s life.

Judy grew up in Rosedale, Queens, with her three brothers in a loving family that was always involved in the life of the parish and the neighborhood.  The Church was right across the street, so the Burchyns’ family was called on for many activities.  Her father, Tony, was a NYC fireman and her mom, Marge, was a teacher at St. Clare’s School.  Tony was always looking out for Judy, always concerned that she would be ok.  He would ask me, “Will she be ok there?  Does she need anything?”

Judy’s call to religious life was nurtured in this family that was characterized by its warm hospitality, generosity of time and treasure, and care for the dear neighbor.  These same gifts drew Judy to the Sisters of St. Joseph in 1957 after she graduated from The Mary Louis Academy. During these past 60 years, Judy shared with all of us her own warm inclusive manner, her generosity especially to those in need, and her care for the dear neighbor.

Formerly known as Sister Marie Antoine, Judy’s early ministry assignments were to Visitation School, Red Hook, St. Teresa of Avila, South Ozone Park and SS Peter and Paul, Williamsburg.  In 1965 Judy began her ministry in Puerto Rico at Colegio Santa Teresita, Puerto Rico and then as principal of Colegio San Jose, San German.  She returned to Long Island in 1978 to become the principal of SS Cyril and Methodius in Deer Park where Judy remained until 1983 when she was called to serve as principal in Puerto Rico at San Ignacio in Rio Piedras.  In 1989, she became principal of St. John of God School (Our Lady of Providence) in Central Islip.  In 1998, Judy once again returned to Puerto Rico to begin her ministry at Academia Maria Reina where she served as principal and then president of the school until her retirement in 2017.

It was during Judy’s time as a principal and later as President of AMR that her skills set her apart as a successful and respected educational leader.  The many awards she received over the years affirm all that she accomplished.  In my eyes, Judy was happiest when she was building something – whether it be bricks and mortar or building relationships.  But putting up buildings was one of her favorite things – whether it be the new wing at San Jose in San German or the concha (a gymnasium) and new wing at Maria Reina and many others of a somewhat smaller but equally significant  nature..  At St. John of God in Central Islip, when there was not enough room for the students and the services they received from the district, she brought in portable classrooms and put them in one of the parking lots.  I think she really wanted to build an addition.

Judy’s generosity of time and treasure inspired the students and faculty to develop creative approaches for serving the dear neighbor – in San Juan, in Brentwood, and in Hampton Bays.  Her ability to forge relationships led to an exchange program between SS Cyril and Methodius in Deer Park and the students at San Ignacio in Rio Piedras.  In more recent times, the exchange program included representatives from our CSJ schools going to Academia Maria Reina, and then with the students from the academy sponsored by the Sisters of St. Joseph in LePuy, France.

In all of her activities, Judy demonstrated boundless energy for the mission of the Sisters of St. Joseph.  A faithful daughter of St. Joseph, her sleeves were always rolled up – ready for the next adventure.  The many projects, events, and programs she started were neither haphazard nor without reflection.  Rather, they were born out of Judy’s commitment to the mission of the Sisters of St. Joseph and the vision that responded to the needs of the time.  No task was too great or too little if it made a difference in the life of another individual or group of persons.

For almost 20 years, Judy was affected by Parkinson’s Disease.  But she faced that with courage and did not let it limit the many things she wanted to do.  Never did she look for sympathy or ask the question that others in the same situation might ask, “Why me?”  Many times I think Judy had more energy than the healthy individuals surrounding her.

Judy’s life as a Sister of St. Joseph is celebrated today by all of us gathered in the sacred space.  We honor the life she lived, the vision she brought to her ministries, the relationships she developed, her generosity for others, her care for the dear neighbor and the courage with which she faced her own physical debilitationn.  Now we honor Judy by taking these gifts and making them our own so that her memory is celebrated not only today but well into the future.

We thank you, Judy, for a life well-lived, for all that you have given to your family, to the Sisters of St. Joseph, to your friends and colleagues, to those to whom you ministered, both here and in Puerto Rico.  May you receive the reward promised to all good and faithful servants.  Thank you, Judy, for sixty years of friendship and for all you have been for me.  Rest peacefully now.
Sister Angela Gannon, CSJ

Sister Judith Marie Burchyns, CSJ died on July 30, 2017 in the 60th year of her religious life.