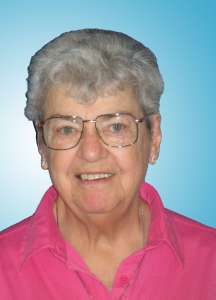 We come together to celebrate the life of Sister Laurette Rita Weiman, a Sister of St. Joseph for seventy one years. I had the opportunity to visit our sisters in Puerto Rico last Thursday until this past Sunday. On Thursday evening I received the call that Laurette had suffered a major stroke and just after that call I heard she died. Laurette spent fifteen years on the island so all of the sisters I was with remembered her fondly and with admiration, immediately telling stories of her influence in the lives of so many.

Laurette was born in Queens to Julia and Elmo, and grew up in a large family with her dear brother Donald, here today, and as we heard last evening linked as siblings “three and four” in the family. That link with family has been strong and influential on all generations to come.

Laurette attended Saints Joachim and Anne’s parish school and Bishop McDonnell High School. A year after graduation Laurette entered the congregation. Early on, she taught elementary grades in Brooklyn at St. Michael’s, St. Anthony of Padua, Holy Cross, Queen of All Saints and St. Stanislaus in Maspeth. During those years Laurette earned a Bachelor’s degree in mathematics from St. John’s University.

In 1976 Laurette responded to a call to serve in Puerto Rico and taught at Santa Monica and San Jorge. She returned to the states to teach mathematics at St. Angela Hall Academy where she developed a long and supportive friendship with Eileen Maguire. Both of their families became family to one another, revealing the love and care shared between Laurette and Eileen.

Laurette returned to Puerto Rico to teach mathematics at Academia Santa Monica and Academia San Jorge. Then she came to Sacred Heart Academy as a math teacher and earned her Masters’ Degree in mathematics from Manhattan College.

Returning to the states, Laurette earned an MBA from St. John’s University and served as a fiscal advisor to our Congregational Schools. With her expertise and dedication, Laurette served as Treasurer at Bishop Kearney High School. She was a Financial Advisor to Christian Brothers Investment Service and eventually treasurer for the Daughters of Wisdom.

Laurette was accomplished in mathematics and used her skills where they were needed. She was also an artist tuning beautiful pieces of glass into images that inspired and moved others to see the reflection of light permeating lives as does the love of God.

From all of the sharing we heard last evening, Laurette was available and stable for her students and her family. That involved babysitting, accompanying family on trips and even bearing needed car seats. But more profoundly, she was always available as mentor and advisor.

Laurette’s unexpected death leaves us with some shock and also gratitude that she did not suffer or linger, not able to do what she loved. But for us who remain, we must remember her stability, availability and willingness to do what needed to be done. Her influence lives on through each one of us to do as she did and as we celebrate Laurette’s life we can promise to be faithful to what she taught us.

Sister Laurette Rita Wieman, CSJ died on March 22, 2018 in the 72nd year of her religious life.