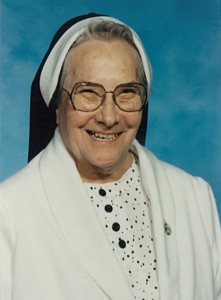 Elizabeth Hill entered the Sisters of St. Joseph on February 2, 1937. At Reception she received the name Sister Mary Ruth.

She earned a BA in Social Sciences from the Catholic University of Puerto Rico and an MA in Spanish from Middlebury College.

Sister Mary Ruth’s early ministry was teaching elementary school in Brooklyn and then at Colegio San Conrado in Ponce, Puerto Rico. On her return from Puerto Rico, she taught Spanish at. St. Joseph HS, Sacred Heart Academy, The Mary Louis Academy and Bishop Kearney HS. During this time she earned a certification in Gerontology.After leaving teaching, Sister Mary Ruth became a parish visitor and an advisor to the elderly.

In 1994, she retired at Bishop Kearney Convent.