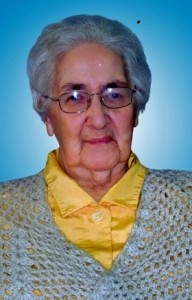 We come together today to celebrate the life and commitment of Sister Muriel Vincent Esposito, born Feb 14, 1922, the third and youngest child of Vincent and Mary Elizabeth. She grew to be a woman of significant talents, almost dogged commitment and a focused intellectual capacity. She had the sensitive nature of an artist and the practicality of a scientist. Muriel entered religious life when Sisters were a formidable work force in the Church and she joined the effort with all the vigor that was in her.

On her own and with no prodding of the Sisters of St. Joseph, Elizabeth went to the Juniorate for High School and then entered the Congregation a few days after her graduation in 1940. As was common in those days, she was in the classroom by Sept. of 1941 in St. Martin of Tours in Brooklyn with probably no less than sixty children sitting in front of her. She was there only one year and was then assigned to Our Lady of Perpetual Help where she taught third grade and art to the whole school for the next ten years. If you had a talent it was certainly made good use of and she was a very talented artist.
For twenty years Muriel taught in the primary and middle grades in six different parishes. In 1967 she got her Bachelor’s Degree in Sociology from St. Francis College and was then assigned to the junior high grades in subsequent missions. She then had to teach science, so true to her commitment, she secured study grants for the next five summers to be well prepared to teach her junior high students. Muriel received a grant for Geoscience I,II,III at Michigan Techonological University, a grant in Field Biology, Geology at Southern Oregon College in Ashland, Oregon, a grant in Physics:Magnetics from Lamar State College of Technology in Beaumont, Texas, a grant in Science at the College of Saint Rose Albany, NY,
a grant in Junior HS Science at Ohio State University in Columbus, and a grant in Astronomy at the Hayden Planetarium New York. Her success in these endeavors was well noticed and she was asked to join the Diocesan Science Committee in the Education Office. She served on that committee for a number of years, staying on even after she stopped teaching science.

In 1974 came the opportunity to apply for an Art teacher position at St. Francis Prep, a non CSJ school , something of a pioneer gesture. She interviewed, displayed her portfolio and was given the position. She taught art there fulltime for the next five years. In 1979 she opted to go back to the parish school where she taught art for the next 15 years.
As a Sister in community Muriel was known as a prayerful woman who participated fully in the life of her local community as well as in the Congregation as a whole. With her artistic abilities she supported many of the works of the congregation that were beyond teaching assignments. As a sister in the local houses she was very appreciated for her baking skills and especially her creative and unique hors d’oeuvres that always enhanced any party.

Muriel used all her energies and gifts in the service of the Gospel. She was a true Sister of Saint Joseph and we have faith now that she is enjoying her eternal reward. “Well done good and faithful servant”.

Sister Muriel Vincent Esposito,CSJ died on April 18, 2015 in the 76th year of her religious life.