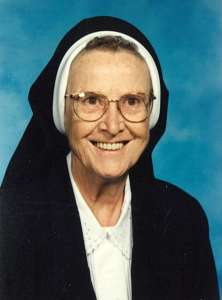 In his poem,” Silence,” Edgar Lee Masters asks: “And for the depths, of what use is language?”  I am certain that since hearing of Pat’s illness and death, each of us who knew and loved her has reached those depths in our own hearts.  We have been with her in prayer and in our memories of this wonderfully loving woman, this faith-filled Sister of Saint Joseph.

However, perhaps some of you do not know that Pat accepted a marriage proposal from one of the eighth grade boys she taught at Saint Joseph’s. She told me that he said, “Sister, will you marry me?” and she answered “Yes!” He asked, “When?” and she said,” Whenever you’re ready.” He was probably one of the boys she used to play baseball with when she pinned up her full-length skirt so she could run the bases.

Having grown up with six brothers, Pat had become an avid sports fan who loved the Mets and was absolutely delighted when Notre Dame’s football team crushed Clemson’s in their recent game.

Pat’s deep, deep faith had set her free to be true to who she was: a woman of prayer and of great determination—a woman with a heart filled with love of her God, her family, her sisters, her friends, her students, and with love for a good laugh!

What a joy it was for all of us when she finally agreed last September to a celebration of her 75th Jubilee as a Sister of Saint Joseph.  At first, she would not hear of it because she didn’t want to “cause a fuss.” However, once she agreed, she was as delighted as we were to have family and friends together at a Mass of celebration followed by a delightful dinner.

Pat was determined not to be a burden to anyone.  If she dropped something and one of us said, Wait, I’ll pick it up.” Her constant response was, “No, I’ll get it.” When I went to see her in the hospital two days after her fall, she asked, ”Did you bring my walker?” When I asked the nurse if I could bring the walker when I returned, her response was an emphatic “No!”

Plans were being made for her release from the hospital when the doctor called to say that she had taken a turn for the worse. I am certain that for Pat that turn was definitely a turn for the better—a turn for the best. Pat was going home—to be eternally at home with her family, her friends and with her loving God.

.Sister Patricia Maris Tully, CSJ died on November 13, 2020 in the 75th year of her religious life.