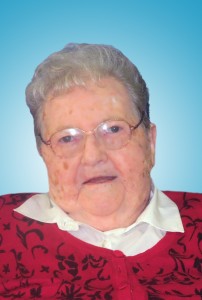 We’ve gathered today to say farewell to S. Patrick Maureen Diamond –  a 91 year old woman who was a Sister of St. Joseph for 72 years.   Patrick was born  Mary Elizabeth Diamond to Anna Marnell and Frank Diamond in Buffalo, NY on Jan 19, 1923.  Both her parents had emigrated from Ireland in search of work and initially found it in domestic service.  Sadly, though, her father died when she was only 6 yrs. old and her mother had to find better paying job to support herself and the little girl.  It was 1929, the hard time of  the great Depression just beginning.  Many comfortable households could no longer afford domestics so Anna Diamond was forced to find work at Letchworth Village in Rockland County.  The Village was an Asylum for the Disabled and Mentally Challenged.  Mary Elizabeth had to stay in Brooklyn with her Aunt and Uncle because her mother worked long hours and lived in staff housing.  Patrick Maureen and her mother never lived together again but maintained a very close bond.  Mrs. Diamond worked at Letchworth for 37 years and when she died in 1959 she left her daughter $10,000.   In 1971 S. Joan de Lourdes gave Patrick permission to use some of that money to visit Ireland.  It was a high point in her life.  She loved all things Irish and no doubt came home with more Irish ditties, song and poems than she went with.  The children she taught had a whole new repertoire through which to learn English, Geography and everything else she taught them through her Irish songs. Patrick Maureen leaves behind a wonderful reputation as a Sister of St. Joseph.  When I asked sisters if they knew her the unequivocal response was “What a wonderful person to live with”, and I heard it time and time again.  People she taught remember loving to  be in her class as a place of fun and painless learning.  She had no discipline problems.  She loved the children and they always knew it. As one, who no doubt, had something of a difficult childhood, being separated so long from her beloved mother, Patrick grew to be loving,  giving adult who never complained or asked too much of people.  She was known as “Sister Boss” on the second floor of Maria Regina because she wouldn’t let people leave the room until she had finished a story – but the tears shed by many when she died attest to the fact that “Sister Boss” was loved in this house as she had been everywhere else she had lived. It would seem that the Diamond lineage has died out with the death of  Patrick Maureen but that’s not so.  In her time here in MR she became “Grandma” to Nancy G, to Crystal and Maria, and others who served her so well. She in turn was the loving, listening ear who cared about everything in their lives. DNA and blood does not define a true lineage. It’s the love that passes between us and sparks the next generation to good things.  Patrick was that kind  of a spark wherever she lived.  She will be missed. May you  rest in peace, Patrick. Sister Patrick Maureen Diamond, CSJ died on February 21, 2014 in the 72nd year of her religious life.