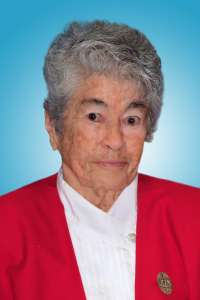 Sister Richard Maureen Rowan, also known as Catherine Hyacinth Rowan was born to immigrant parents from Ireland and lived in Corona, Queens.  Catherine was one of five children and their home was filled with life and laughter.  Relatives and friends gathered for Sunday dinner and for stories which gave encouragement to each other in making their way in a new country, far from home.  Some relatives were welcomed to stay for a while in order to settle in, save money and look for work.  Three of those relatives were my mother and her two sisters.  As they dressed up each morning, Mrs. Rowan was known to say to them ‘go out now and walk like you own the block.’  Perhaps it was in that setting that Catherine honed her gifts of storytelling, speech, humor, generosity and hospitality. And is that also where she practiced her regal charm?

Her teachers were Sisters of St Joseph in Our Lady of Sorrows School and St Joseph Juniorate.   After school, Catherine entered the Congregation in 1941 and received the name Sister Richard Maureen after her parents. She stayed very close to them and her four siblings throughout their lives.

Another quality and gift Richard had was a quiet, deep stream of compassion from which she witnessed others’ needs, many of them, unspoken.  Making sure a student had milk money every day when her parents were having a rough time financially or helping a student not be expelled after a serious misdeed are just two of the many stories circulating in the towering edifice of her life journey.  The large number of students who  kept up with her made her  happy and yet amazed.

Those  early years of seeing hospitality at home, prepared Sister Richard for all the welcomes she gave…when the Sisters opened the School for the Deaf in the earliest years, Richard made them  welcome in the Convent on President Street.  They still talk about this.  Sisters also talk about Richard enjoying a good meal and socialization after a long and busy week in the classroom…she knew interesting places to go and she arranged gatherings of teachers to relax, eat and laugh together.   Some of you who were in those gatherings, are here today.  At home, Richard was a wonderful cook and turned the simplest fare into a great feast, again with fun and generosity. Another aspect of her generosity and hospitality was to sit by the phone in Resurrection Ascension convent to make and receive calls.  If she could not get out herself, she was aware of the homebound and would call them.  It makes me smile to recall her rich, regal voice answering a phone call with’ Resurrection-Ascension Convent  as  though she were  speaking to an audience.

Then, of course, there was Hampton Bays – How many of us recall the welcome we received at St Joseph Villa and how determined that the week we had there was to be free of stress and filled with good humor, relaxation and time for community.

In closing, there is a short and important page in Richard’s long life…her time here at St Joseph Convent. She asked ‘what do I need to do to be accepted here?  An answer was given and soon, she was seen out on the exercise bike for greater mobility and sitting out in the recreation and dining areas,  giving life and energy to all…ever a contributor!  And, we know the impact she has had here, where she received wonderful care.  Everyone of the Sisters, nurses, aides, therapists and staff knew and loved her.  Often there was a line by her door to have a word with her.

And so, to all of you, she would say ‘thank you’.  As you know the suddenness of her death left no opportunity for a final word.  Perhaps, these few will summarize what she would like to say to us ‘Be strong, keep on, always be kind, do it all with grace and humor, and again, thank you, all’.
Mary Doyle, CSJ

Sister Richard Maureen Rowan, CSJ died on January 5, 2019 in the 77th year of her religious life.