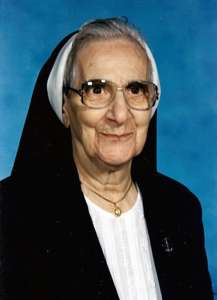 Sister Rita Josephine ministered in Brentwood for all of her eighty five years as a Sister of St. Joseph. We all know and celebrate Rita’s long life of 103 years and are grateful that eighty-five of them were with our congregation.

Born to Josephine and James in 1914, Rita grew up in St. Ambrose Parish in Brooklyn. A child of Italian immigrant parents, her deep faith was nurtured from an early age. Rita entered the congregation at the age of seventeen. We remember her ministry of presence to the children in our Academy, especially the borders who needed to know there was someone, Sister Rita, who would look after and care for them while they were away from parents and family.

Rita was a faith-filled, humble, consistent woman who listened to her God all of her life. Most of us in this chapel can envision Rita sitting right here or in Sacred Heart Chapel every day for mass. She served as Sacristan for our Sacred Heart Chapel for ten years. Rita continued to listen to God and with her warm smile witnessed to all she encountered: God is with us.

As Rita journeyed through her last days of life we were all surprised by her strength to cling to life. But late on Wednesday, January 10th, Rita was welcomed into the arms of her loving God. The formal pronouncement of her death was on January 11th. But I could not help to notice that the first reading of the liturgy for January 10th was from the Book of Samuel. Ironically, it was the first reading for this past Sunday’s liturgy. It is about the call of Samuel. Three different times, Samuel heard his name called and responded “Here I am. You called me.” Samuel thought it was Eli who called him but it was the Lord. Rita heard God’s call and responded by ministering here at our Academy for thirty-seven years. God called her and she listened once again to serve the congregation as Sacristan for our Sacred Heart Chapel for ten years. Remaining here in our Motherhouse, Rita, as Samuel, was very aware of God’s presence with her so, again as Samuel, “no word from her would be without effect.”

Over these later years in her life, anyone who came into Rita’s presence was  recognized, affirmed and encouraged. Her trust in God, her humble, simple ways revealed her belief that every good thing she had was a gift from God. She openly expressed that all the people around her made her happy, especially the nursing staff, aides and house staff. She did the ordinary with extraordinary care and trusted in God’s providence.

Rita’s whole life was a witness to her faith and trust that God would show her the path of life. Now, gratefully, she enjoys the fullness of life forever. We celebrate her life, thank her for the generous gift of her years and we love her.

Sister Rita Josephine Lisanti, CSJ died on January 10, 2018 in the 85th year of her religious life.