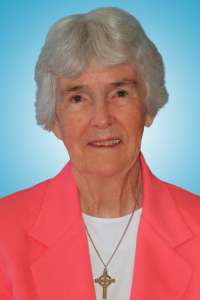 As Isaiah tells us from the beginning God created you, formed you and called you by name. We celebrate the life of Monica Diffley who responded to that call as a Sister of St. Joseph for seventy-six years

Monica was born in Brooklyn to Emily and Peter and lost her mother as an infant. Relying on God’s promise that “I will be with you,” Monica developed a deep faith and trust in that promise. She attended St. Brendan’s elementary and high school and developed a life-long bond with her brother Frank who became a Maryknoll priest. Soon after high school Monica entered the congregation and became a teacher.

A good teacher can inspire hope, ignite imagination and instil a love of learning. Monica did that teaching every elementary school grade from first to eighth in Brooklyn, Queens and Long Island. I can personally attest to Monica’s excellence as a teacher but most of all to her kindness. I had Monica in 1A in St. Francis de Sales, Belle Harbor. One vivid memory reveals her skill and her compassion. Using our manuscript workbooks in a class of 52 first graders, we diligently traced over the dotted lines of each letter. A boy next to me, Tommy tightly grasped his pencil and his lines were well outside of the model letter. Monica walked down the aisle and with her red pencil drew a line over the model and said to Tommy: “Now you just put your line on top of mine.” There was no big red X to mark it wrong, just patience and encouragement.

Monica earned a Bachelor’s degree in English from Manhattan College and a Master’s in Education from the University of Chicago. She taught in eleven different parish schools throughout Brooklyn and Queens before coming to St. Bernard’s in Levittown, where she taught seventh and eighth grade Language Arts for twenty-one years and ministered there for forty- three years.

Recognized as an excellent teacher, Monica administered the Brentwood Education Center, for fourteen years. During all of those years Monica also taught CCD in many of the parishes where she ministered.

A committed and spry walker, Monica brought her energy and caring ways wherever she was.  She was always attentive to listen to and encourage others in their struggles, Monica shared her deep faith and trust in God. She knew God was with her and as she faced diminishment later in life, she relied on God’s companionship and continued to exude care and kindness to all who cared for her.

Sister Saint Monica Diffley, CSJ died on February 21, 2020 in the 76th year of her religious life.