Sisters of St. JosephUniting All in God's Love
News by Clara Santoro November 25, 2019 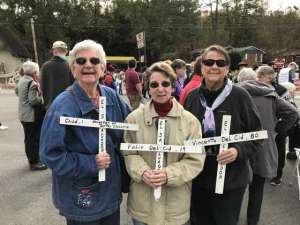 The School of the Americas Watch Movement initially formed to denounce the massacre of the six Jesuit priests, Elba Ramos and her 16 year old daughter, Celina, in El Salvador. This year marked the 30th anniversary of their martyrdom and the call to close the SOAs echoed among the hundreds who gathered at the gates of the training facility. The SOAs at Fort Benning, GA is the training ground for Central American militaries that along with United States funded civil wars have perpetrated many atrocities in El Salvador.

Among those participating in the witness were Eileen McCann, Elizabeth Hill and Marianne Mocarski. For many years they have faithfully made this journey to Fort Benning, GA to call for the closing of the SOA. This year they carried the spirit  of Therese Marie Camardella, CSJ who companioned them over the years. Presente!

Not on Our Turf Workshop