Sisters of St. JosephUniting All in God's Love
News by Administrator April 22, 2020

On April 22, 2020 the US celebrates the 50th Anniversary of Earth Day. It was the idea of Wisconsin Senator Gaylord Nelson to focus on environmental conservation after an oil spill in Santa Barbara, California in 1969. In 2009, Bolivia initiated negotiations on recognizing interdependence among human beings and living species. To foster Harmony with Nature the United Nations General Assembly declared April 22, International Mother Earth Day. Each year there is a theme for the celebration; for 2020 it is biodiversity and reduction of carbon emissions. www.harmonywithnatureun.org/chronology. UN Secretary General Antonio Guterres stated that in 2020 “We must act decisively to protect our planet from both the coronavirus and the existential threat of climate change.” He outlined the relationship among coronavirus, biodiversity and climate change.

• “One new infectious disease emerges in humans every four months.”
• “A healthy ecosystem helps to protect us from these diseases. Biological diversity makes it difficult for pathogens to spread rapidly.”
• “It is estimated that around one million animal and plant species are now threatened with extinction.”
• “If we fight climate change and biodiversity loss turning to sustainable models will help not just nature but human health.” https://www.un.org/sg/en

As the coronavirus pandemic ravages the globe there are two international Agreements/Conventions that provide insight for remedies for mitigating such outbreaks in the future.

The Convention on Biological Diversity (1993) has 3 main goals: conservation of biodiversity; sustainable use of it components; fair and equitable benefits of using genetic resources.” (Article 1) The US is the only country which hasn’t ratified the Convention. Relationship between climate change and the coronavirus is linked by the biodiversity crisis. When human destruction of environments such as forests occurs, it destroys the habitat of certain species and reduction in biodiversity. The extinction of these plants and animals impactsthe ecological balance.

The Paris Agreement, negotiated under the umbrella of the UN Framework Convention on Climate Change (UNFCC) was adopted by the UN General Assembly in 2016 to reduce global warming. Without global warming mitigation there will be major shifts in land based ecosystems. It is expected that many species will be pushed to extinction and continue to upset the balance of the ecological system.https://www.un.org/sustainabledevelopment/climate-action/

The UN has created Act Now calling individuals to action and the implementation of the Paris Agreement. The Two mini campaigns of focus are food and fashion.

Food: how to bring sustainable food to the table.

Fashion: how to reduce the non-natural fibers in clothing which contribute 10% of global emissions. (https://www.un.org/en/actnow). 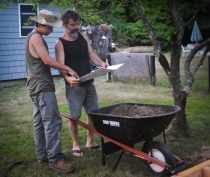