Sisters of St. JosephUniting All in God's Love
News by Clara Santoro September 21, 2019 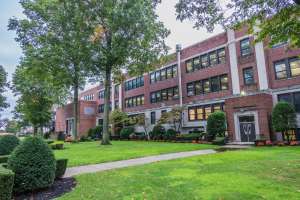 When Sacred Heart Academy in Hempstead opened as the Mary Louis Academy Annex in 1949, the school had 58 students. Seventy years later, the all-girls school has a student body of more than 850. While the number of students and the size of the campus have increased, SHA’s mission has remained the same: to educate and empower young women.

Students come from more than 50 school districts across Long Island, with many from Nassau County’s North and South Shores. Sacred Heart boasts roughly 11,000 alumnae, many of whom who have continued volunteering in their professions and communities. As SHA prepares to celebrate its 70th anniversary on Sunday, many faculty members said they look forward to seeing former students and teachers.

Along with the celebration, Sacred Heart recently launched a strategic-planning process to study the needs of school moving forward. The plan will take shape over the next three to five years.

“Each year has its own energy,” President Kristan Graham said. “Sometimes you get caught up in all these things, but when you really realize that you’re here to educate and empower young women, I think always that makes the work feel meaningful. There’s a strong tradition rooted here with a really bright future.”

The celebration, which starts  with Mass at 10 a.m. on September 22nd  will feature alumnae from each decade, former and current faculty, staff and administrators, and current students and families.