Sisters of St. JosephUniting All in God's Love
News by Administrator June 29, 2020 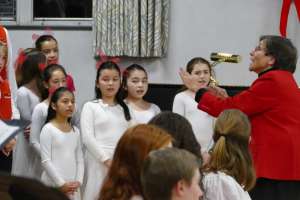 Sister Kathy Schlueter (pictured here directing the Our Lady of the Hamptons Regional Catholic School Choir) has been the principal of Our Lady of the Hamptons for 32 years. Prior to OLH, Sister Kathy worked for four years at St. Patrick School in Smithtown teaching first and fourth graders, and then spent 16 years at Sacred Heart Academy teaching music, drama, and acting as dean of students. Sister Kathy had never thought about being a principal, but while at Sacred Heart, Sister Miriam Lucille asked her to consider that path – a conversation that led her to administration classes. When Sister Virginia Crowley was leaving Sacred Heart as Principal,  Sister Kathy decided to put her administration degree to use and apply for principal jobs.

When Sister Kathy applied for principal positions at the diocese, she didn’t know what schools would be available to her. When she indicated she would like to go as far east on the island as possible, she was told they had just received a letter the previous day that OLH was looking for the diocese to take over the school and they would need a principal. It seems it was meant to be since Sister Kathy was told they did not know how long the school would continue to operate and to give it a try for two years  – and 32 years later, the school is thriving.

Sister Kathy realized when she started as principal that the school needed an identity, and she built that identity around fine arts. The broad scope of artistic activities – from violin and guitar, band, three leveled choruses, bell choir to ballet, tap, jazz, rock band, drama and graphic art – result in well-rounded students. Sister Kathy seeks faculty that can teach these specific things as well as core subjects. Teachers, aides, and those in various positions teach fine arts at the school. For example, there are currently 110 students taking tap at the school – even currently through Zoom .  Take a look at all the recent at home concerts here.

Sister Kathy has an active Youtube channel to reach her students, especially while school is currently closed, and on of her recent messages is below: https://www.youtube.com/watch?v=v5zGBXlxMp8

FaithLands Highlights Work of the Sisters of St. Joseph 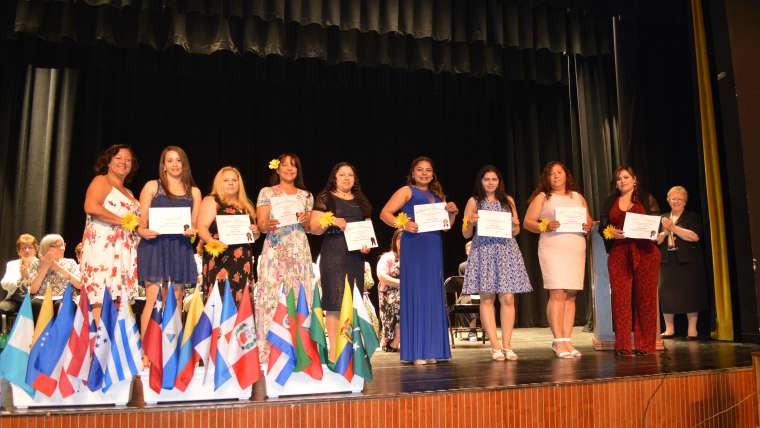