Sisters of St. JosephUniting All in God's Love
News by Clara Santoro May 31, 2021

St. Michael’s Catholic Academy in Flushing honored the Sisters of St. Joseph of Brentwood at a plaque dedication ceremony on Wednesday, May 26, in the school’s faculty room. 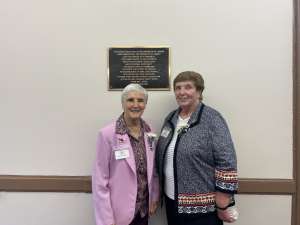 The Sisters of St. Joseph have had a strong presence at St. Michael’s, located at 136-58 41st Ave., shortly after the school opened in 1851, where they served as administrators, teachers and counselors.

Principal Maureen Rogone said said that for over 150 years while ministering at St. Michael’s School, the Sisters of St. Joseph have shown strength and courage to face the challenges of the times in Flushing, and globally in their mission religious women. 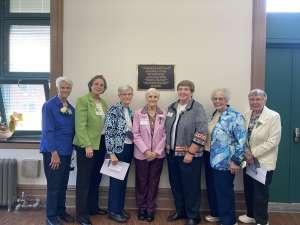 “Their progressive and inclusive approach, not only in education but in social issues, continues to inspire the teaching staff at St. Michael’s Catholic Academy as we are challenged with educational reforms while preparing our students to be responsible global citizens,” Rogone said.

Monsignor David Cassato, vicar for Catholic Schools, and Janet Heed, district superintendent, were in attendance representing the Office of the School Superintendent for the Diocese of Brooklyn.