Sisters of St. JosephUniting All in God's Love
News by Clara Santoro July 9, 2015 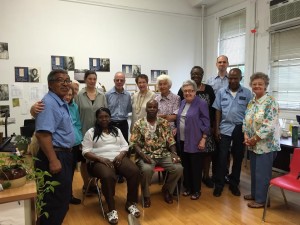 Friends, family, and co-workers gathered on June 16 at St. Angela Hall to celebrate a farewell to the Mayor of Clinton Hill, Junior Small. All were invited to have lunch and share their “Junior stories.” Junior’s wife was in attendance. Junior dominated the gathering in his usual gregarious manner!

Junior was a good friend and longtime loyal employee of the Sisters of St. Joseph. A resident of the neighborhood since the early 1970s, Junior knew everybody and everybody knew him. He was always there to lend a hand or give advice, hence the name the Mayor of Clinton Hill.

The event was hosted by Mik Larson of the ACES Department. ACES is a scholarship program for English as a Second Language students at St. Joseph’s College. Other SAH office personal present were S. Margaret Buckley (Secondary Ed), David Seppala-Holtzman (Math), S. Susan Wilcox (Campus Ministry) who all spoke of Junior’s unwavering care of the building and their offices. Dillon Child Study staff and Plant staff were also present.

Also in attendance were two former principals of St. Angela Hall Academy, S. Clara Santoro and S. Mary Sevillo, both of whom spoke of Junior’s pastoral care in which he often greeted them with a homily of the day.
We wish Junior and his wife well in the next phase of their life in Deerfield, Florida! If you wish Junior’s Florida address, send a request to Mik Larson at mlarson@sjcny.edu