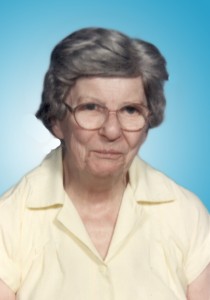 Dorothy Freligh was born in her beloved Brooklyn a little over 90 years ago.  She was the second of 3 daughters born to Edward and Agnes Freligh.  Their Bay Ridge home was in the shadow of the majestic OLPH Church.

The 3 girls, having lost their parents during their primary school years, were embraced by the Congregation which was not a stranger to them because of their aunts, Sisters Louis Bertrand and Jean Loretta.  Early elementary, middle and high school years brought Loretta, Dot and Mary to Brentwood as boarding students at the Academy of St. Joseph.  While this young girl grew into a multi-talented young woman, one might imagine that she had some moments of loneliness.

Her aunts, in their wisdom, insisted that Dot complete college before she followed her desire to join the Congregation.  She received her bachelor’s degree from St. Joseph’s College in Brooklyn.  Returning to Brentwood for 2 years of her novitiate and after a few initial years teaching in elementary schools in Brooklyn and Queens, the now Sister Agnes Muriel brought her skills as a teacher of Algebra and Home Economics to St. Angela Hall Academy and Stella Maris High School.  Administrative abilities later found usefulness at St. Agnes Seminary and Bishop Kearney High School.

But, for a few minutes, let me share with you my impressionable memories as a 13 year old beginning freshman year at Stella Maris High School.  Agnes’ whole being as a Sister of St. Joseph was such an expression of our charism long before I even knew what the word meant.  She had an uncanny ability to relate to all types of students – the cooperative as well as those who challenged the structures of a 1960’s all girls Catholic high school.

Agnes truly was neighbor to all without distinction.  She was a great teacher, an advocate for all students, a cook, buyer, seamstress, crafter, mentor, sponsor, sister, aunt and friend and was generous beyond measure.  Always on the move, sleeves rolled up or detached…service to and for others was Agnes’ mode of being.

Aunt Dot was always there for her nieces and nephews.  She could whip up a complete turkey dinner for the sisters or her family after a day of teaching, and with the appearance of effortlessness.  All this was before the 6 o’clock Angelus bell!  Agnes knew she had been given the gift to spend her life giving God’s love away.

As the millennium years began to challenge her fine mind, her need for help and safety called for a full circle response.  Agnes’ life of dedication, friendship, openness and service, all punctuated with prayer, ended within the loving arms of Brentwood.

Today we celebrate her welcomed freedom.  Calm, efficient, capable and quick, Agnes leaves a blessing with each of us.   Thank you, Agnes, Aunt Dot, SAM, for the many ways you invested your life in and with the lives of others.  We love you and we will miss you.

Sister Agnes Muriel Freligh, CSJ died in January 30, 2016 in the 70th year of her religious life.