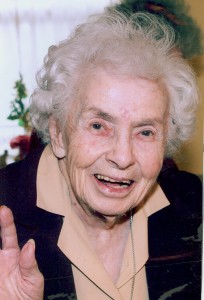 Mary Anne Roach entered the Sisters of St. Joseph on February 2, 1941. At Reception she was given the name Sister Catherine Immaculate.

Catherine earned a BA in English from St. John’s University, an MA in Speech from Columbia University, and certification in Administration from Fordham University.

Catherine’s early ministries were teaching elementary school in various parishes but in 1960 she became a teacher of English at Bishop McDonnell Memorial High School. She then taught English at St. Agnes Seminary. In 1968, she was appointed as principal in St. Martha’s School in Uniondale. When she completed her assignment there, she became Public Relations Director in Education for the Diocese of Rockville Centre. After that, Catherine joined the faculty at Sacred Heart Academy in Hempstead as a teacher of English, a position she held until her retirement.

We gather this morning to celebrate her life. Sister Catherine Immaculate was a Sister of Saint Joseph for seventy-three years. How fitting that we gather for this liturgy during the season of Advent, a time of waiting and anticipation.  Throughout her life and the long years of her illness Catherine waited in anticipation and grew in her knowledge of God’s ways. In times of darkness and doubt she continued to seek the light offered to her by a loving God.

As a congregation we seek God’s light to know the greatest needs of the dear neighbor. Then we do whatever needs to be done to meet them. Catherine did this through her teaching and administration, demanding excellence, encouraging her students and colleagues and supporting anyone who might be struggling. She did whatever needed to be done with dedication and faithful to the God who loved her unconditionally.

Sister Catherine Immaculate Roach died on November 29, 2013 in the 73rd year of her religious life.