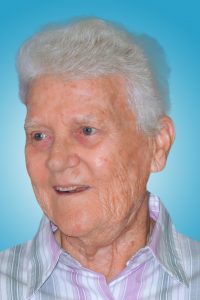 Dolores Ann Lawson entered the Sisters of St. Joseph in 1947 and at Reception, she received the name Sister Ann Dolores

Sister Dolores Lawson lived life to the full as a Sister of St. Joseph for 69 years. To prepare herself for ministry, she earned a BBA in Business and an MS in Administration & Supervision at St John’s University.

Dolores loved life. She shared her vitality first as an elementary school teacher and then as a principal. After a sabbatical year at Eastern Point House of Prayer in Gloucester, Maine, she dedicated her energies at Alhambra House in Huntington Station as Community Residence Manager.  During those years, she received the 1990: Regina Award and then the Direct Care Worker of the Year Award from NYSACRA. Prior to her retirement, she served in the Finance Office in St. Joseph Convent in Brentwood.

Because of her resilience during her illness, many of us often referred to Dolores as the “Come back Kid”.  Often in her later years we saw Dolores regain her strength and continue to live. In her corner of the world, she shared that life as teacher, principal, caregiver and as sister, aunt and good friend.  She was Christ in the world by living a life that was simple, prayerful courageous and compassionate. Thank you Dolores, you will continue to live in our hearts!

Sister Dolores Ann Lawson, CSJ died on August 18, 2016 in the 69th year of her religious life.