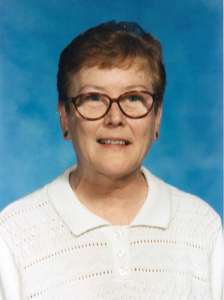 It is a joy and a privilege to be here to pay tribute to a special person-Sister Elizabeth O’Neill, CSJ, Aunt Itzy, and our dear friend, ITZY!!!  A unique name for a very unique person. But how did Elizabeth O’Neill become “Itzy”?

It all began with Mr. Consolari, the O’Neill’s downstairs neighbor on Kingston Avenue in Greenpoint who would sing the “Itzy Bitzy Spider” song to the little girl who sat on his knee. After a while his greeting became simply “Itzy,” and the name stuck!

Elizabeth  O’Neill was Itzy all through her childhood, her school years, and all through her 57 years as a Sister of Saint Joseph. That’s where Itzy’s name came from, but she became who she was, the woman we all love, in a wonderfully loving and vibrant home. When you entered the O’Neill home you felt as though warm and loving arms embraced and welcomed you. Family celebrations were many, and they were so alive, so much fun, so full of energy! There was an abundance of laughter-of loving being together. In this loving family atmosphere, she learned to trust herself, to speak her mind freely, to be true to who she was.-to trust her heart. Mrs. O’Neill was an especially welcoming person-with a wonderfully loving heart and a very keen sense of humor, but of orderliness and cleanliness as well. An example: Once when she began suffering from neck pain, she was eventually encouraged to see a doctor. When he asked her to let him know when specifically the pain was worst, Mrs. O’Neill told him that it was when she was vacuuming the ceiling!

This same quality of orderliness showed up in Itzy as a math teacher-a rather demanding one! She believed that students should learn to respect the subject, and to be accurate and disciplined when dealing with math concepts. Once, as an eighth grade math teacher, she required her class to stay after school every day until they realized that she meant it when she told them how they were to set up a math page. They learned!.

People often said that with Itzy, “What you saw was what you got.” Although I agree thoroughly with that, I think Shakespeare had Itzy in mind when he had a character in Hamlet caution his son: “To thine own selfbe true-thou canst not then be false to any man.” In my judgment, that was who Itzy was-a person who was true to herself-to her deepest heart and to those with whom she interacted. When she was asked to accept the principalship at Saint Mary’s school, her deepest and most loving qualities became evident. Though she still required discipline both of her students and her teachers, she opened her heart to all of them-especially to parents who were having either marital or financial problems. When she learned of a woman whose husband had left her when she was pregnant, and with two small other children, Itzy accepted the two children tuition-free and arranged for someone to take care of the baby after it was born. In that way, the young woman was able to get a job and support herself and her children. Stories like that abound, and I am certain that some who are here present could tell ofher kind graciousness.

It would not be fair to Itzy to leave out her love of smoking. She tried often and valiantly to break the habit, but to no avail. Once when she was smoking on the steps outside the convent on President Street (she refused to smoke in the house), a woman passerby commented that it was nice to see a sister smoking.   Itzy responded by assuring the woman that she also drank and played the numbers! The nuns called this Itzy’s Stoop Ministry!

A final tribute to you, Itzy, “I know that 1 am a better person because 1 have known and loved you.” We are all better people for having known you. Thank you, dear Itzy, dear true friend. We will miss you! God bless and keep you always!
Sister Edyth Fitzsimmons, CSJ

Sister Elizabeth O’Neill, CSJ died on December 27, 2018 in the 57th year of her religious life.