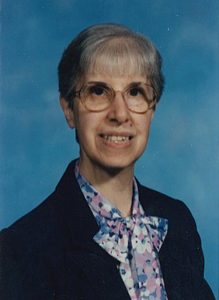 Like all of us, Gloria was a multi-facetted person.  However, I would offer the word “devotion” as the word that weaves her life together.

Gloria Portolano, and her twin, Marilyn, were born to Gaspar and Ida Portolano on June 19, 1925 in Brooklyn, New York.  They joined their big  sister, Florence and soon became known as “Flo, Mo and Glo” and lived as a close Italian family in Queens, New York.  After her graduation from Richmond Hill High School, Gloria pursued a career as a secretary.  In 1959, she chose to join her twin, Marilyn, and enter the Sisters of St. Joseph.  At that point, she was 34, yet she developed a whole new facet of her life by studying for her degree in Education.  She taught in several elementary schools in Brooklyn, Queens and Brentwood before serving in Cleary School for the Deaf both in the library and as a secretary.  Coming full circle, she completed her ministerial life by serving as personal secretary to the General Superior for several years, as secretary in offices in Maria Regina, the Convent and the Renewal Center before she finally retired in 2003.

Throughout her life, she was devoted to her family – loving her visits to her parents’ home and then to Flo’s.  Her nephew, Bill, says he wishes we knew her as she was in the intimate circle of the family – quick-witted and jovial.

Her party certainly saw aspects of that.  In retrospect, they marveled that a 34 year old professional woman could put up with the antics of 17 and 18 year old girls.  But she did – almost with a maternal care for them.  Even until recently, she enjoyed the stories they told.  She would often say to Grace Lynch, her faithful proxy and friend, “Are you for real?” and then laugh heartily at the story that had just been told.  She also enjoyed golf cart rides around the property and we know she loved the visits from any dog – especially Rae-Rae.  If there was a party or a prayer service, Gloria would be there.  That was another aspect of her devotion – she always showed up.

That devotion was true of her as a secretary, too.  In the stories shared yesterday afternoon, so many people commented on what a good, organized, precise, competent and confidential secretary she was.

However, her devotion reached its peak in regard to her twin, Marilyn.  She always wanted to be with her, especially as Marilyn became frail.  When Marilyn died almost six years ago, Gloria could never really take it in.  The selections for today’s Mass are the same readings and songs Gloria chose for Marilyn’s mass.  Now, Gloria – your fears and anxieties are over, you have won the prize, and you will continue to praise God by your very being.  And when we go down to the cemetery later this morning, the twins will lie next to each other again as their spirits soar in glory before God.  Rejoice, Gloria!
Phyllis Esposito, CSJ

Sister Gloria Marie Portolano, CSJ died on August 10, 2017 in the 58th year of her religious life.