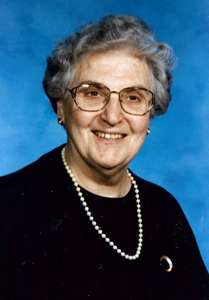 At the wake yesterday afternoon and again this morning we heard many wonderful stories of the ways that Gloria touched the lives of her family and friends, members of our congregation – especially those who lived with Gloria, and those who ministered with her whether briefly or for a longer period of time.

AIthough I knew Gloria as a Sister of St. Joseph, I first came to know her when we lived together at St. Brendan’s Convent in Brooklyn where Gloria was the Principal of the elementary school and I taught in the high school.  During her time in school administration, it became clear to Gloria that this was not the best fit for her although she did a great job.  Gloria always had high expectations both for herself and those working with her.  After that I also lived with Gloria at St. Michael’s Convent in Sunset Park for many years.

In looking over Gloria’s biography, it is obvious that she believed in life-long education.  She built on her bachelor’s degree in sociology and her master’s degree in political science by attending workshops sponsored by the American Bar Association, the Women’s Institute at Brooklyn College, – to name just a few.  For five years, she served on the Board of Directors of Day Top Village – an education experience in itself.

There is no doubt that the highlight of Gloria’s ministry was during the time that she served as the Non-Government Organization’s (referred to as an NGO) representative at the United Nations from the Congregations of St. Joseph in the US.  This ministry brought together Gloria’s passion for global concerns, especially related to women and children, her ability to articulate clearly her vision and mission, and to gather people together who shared this common commitment. All of her prior educational and ministry experiences served her well as our NGO.

The few times that I went with her to the UN, I was always amazed at the number of people she knew – not just by name – but their whole agenda.  She could sit in the UN cafeteria and hold court with all those who stopped by the table.  Gloria’s years at the UN brought her to several international conferences – with the one in Bejing being the most important to her because of its emphasis on women and the girl-child.  As Sisters of St. Joseph, we refer to these persons as our “dear neighbor.”

Gloria’s immersion in the political agenda continued throughout her life.  Even in her diminishment at the time of the last general election, she listened constantly to CNN, had an opinion about everyone and everything, and was not shy in letting you know what she thought.

But even as Gloria was immersed in the world scene, she could be just as passionate about smaller things around the house.  Her mantra, if you are going to do it at all, do it right – whether it had to do with curtains, furniture, or painting the laundry room.  At St. Michael’s the laundry was hardly a showcase.  But, the basement of the convent was being painted and the laundry room was included.  Two high school boys from the parish were doing the job – hardly a professional one.  So, to guide them along, Gloria took a chair, sat in the doorway and told them exactly how one should paint a wall.  One of the boys went on to become a priest and he would constantly refer to Gloria’s insistence on doing it right.  But, he said, “I did learn how to paint a wall.”

Gloria was a relational person – even when guiding teenagers.  She kept in close contact with her family whether they lived in Michigan, Florida, California, or NY.  Her sister, Barbara, and her brothers Rod and Frank, and their spouses and children were always a source of pride for her.  She especially loved her trips to Michigan for the holidays when many from the family would be together.  Gloria had friends galore from her home parish of St. Francis Xavier in Brooklyn, from her years in Teaneck, NJ where she studied and worked prior to entering the community, and from the many places where she ministered and lived during her 64 years as a Sisters of St. Joseph.

Today, we carry with us the legacy that Gloria left to each of us – commitment to the global agenda, especially as it affects women and children; the importance of life-long learning; attention to the smaller things in life; and maintaining relationships.  We thank you, Gloria, for all that you have given to us.  You did it all, and you certainly did it right!
Sister Angela Gannon, CSJ

Sister Gloria Garcia, CSJ died on February 2, 2018 in the 65th year of her religious life.

US Federation of the Sisters of St. Joseph

Let us remember and celebrate the life of Sister Mary Gloria Garcia, CSJ, who died peacefully on February 2nd. She was pivotal in our acquiring the General Consultative Status for the Sisters of St. Joseph UNNGO when she was our Representative at the UN.