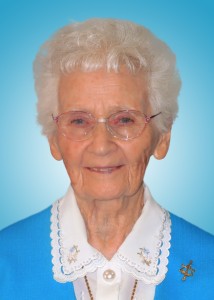 With love and gratitude we celebrate the life of Sister Muriel Keegan, a Sister of Saint Joseph for nearly eighty years. We believe in the power and presence of a loving God ever involved and active in our evolving universe. Muriel knew God’s presence in her life at an early age. With deep faith she was attentive to the stirrings in her heart and knew that she was to bring compassion and healing to those who would come into her life.

Muriel Keegan entered the sisters of St. Joseph on February 1, 1934 and at Reception she received the name Sister M. Simplicia. Most of her ministerial years were spent teaching in various elementary schools. In 1966, she became the principal of Ascension School in Elmhurst and then in 1972, she was appointed principal of St. Patrick’s School in Smithtown.

She also earned a BA in Latin at Manhattan College and an MA in Educational Pschology at Medaille College in Buffalo.

In 1995, she  became the Assistant to the Superior at Maria Regina Residence and later a member of the Pastoral Team.

As Sisters of Saint Joseph we believe in the interconnectedness of all life and we are confident that if faithful to what God reveals in the persons and experiences we encounter, we can help to bring about the reign of God in this time.

In the ever quickening of life’s pace during Muriel’s ninety-six years, her sense of the sacredness of all creation moved her to value relationships with family, co-ministers, her sisters in community and all to whom she ministered. Whether in teaching, administration, or pastoral care Muriel responded from the depth of her being with wisdom, wit, gentleness, and consistency that came from her deep relationship to her God. Wherever she was asked to serve, Muriel was attentive to the needs of all around her in a selfless and loving way. She was an educator but in these later years she loved her ministry at Maria Regina and was supported by her team who lived by our congregation’s tradition of excellence tempered by gentleness, peace and joy. Muriel we know you have heard God’s loving words inviting you to arise and come. Christ has lived in your heart through faith and now you see the fullness of that love. May you continue to inspire us and remind us that we, too, are to be God’s compassion for the poor, needy and excluded of our world.